The NA-A7II is the newest entry in Nauticams mid-range series of underwater camera housings. The NA-A7II is an incremental improvement over the popular NA-A7 housing, and is the ultimate underwater machine for full frame mirrorless image making. This housing does not come with electrical sync connections, but still includes the option for a multitude of bulkhead options.

Vacuum systems verify that your housing is water tight before the dive. The best insurance money can buy.

Stop squinting through the standard viewfinder peephole. Select an expanded viewfinder for a larger and sharper image.

Add an External Battery for the Camera

Nauticam is pleased to announce the NA-A7II, the newest entry in its mid-range series of fine underwater camera housings. The NA-A7II is an incremental improvement over the outstanding NA-A7 housing, and is the ultimate underwater machine for full frame mirrorless image making.

The Sony A7 II Camera
The new Sony A7II (officially called Sony Alpha 7 II) follows hot on the heals of the amazing A7, adding some significant improvments, including a 5-axis sensor-shift image stabilization. The A7II, with its 24MP full-frame CMOS sensor, is the ultimate all-around full frame mirrorless camera to date. Focus is improved with a Hybrid AF system utilizing on-sensor phase-detect points. From a design perspective, other improvements in this model include more rugged build quality, a beefier grip, more and better laid out custom buttons, and a more ergonomically placed shutter release button. Other features include a 3-inch tilting LCD, XGA OLED electronic viewfinder, Multi-interface (hot) shoe, Wi-Fi with NFC, and 1080/60p video recording - now with XAVC S and a flat 'S-Log2' picture profile.

The A7II features the same highly regarded full-frame 24MP CMOS sensor that was found on the original A7 and it continues to impress. The A7II uses a hybrid autofocus system, which has 25 contrast detect and 117 phase detect points spread across its sensor. Sony engineers claim that autofocus performance has improved by 30% and tracking by 50% compared to the A7. Autofocus and now auto exposure can be used while tracking a moving subject during burst shooting (at 5 fps).

Ergonomically, the A7II is improved over the A7, and the difference is obvious when picking up the camera. It feels more substantial in the hand, and the shutter button in particular is more comfortable. The grip is larger and significantly more substantial which keeps the hand in a more relaxed position when gripping the camera. The A7II uses more magnesium alloy and less plastic than the A7; allowing the overall build quality to seem more solid with only a minor increase in weight

Like previous models, the A7II supports WiFi, NFC, and a number of apps making sharing very easy, while opening up the camera's capabilities.

The NA-A7II Housing
The NA-A7II looks quite similar to the NA-A7, and the housings are approximately the same dimensions. As those photographers who have experienced the NA-A7 housing have discovered, that housing is a stunning blend of aesthetics, ergonomics and functionality and the A7II housing only reinforces this mission.

The NA-A7II ships with built-in, yet adjustable handles, featuring Nauticams famous contoured rubberized grip. The AF/MF/AEL button is given special treatment on the right side of the housing with a direct access lever immediately reachable by the right thumb. This allows the button to be programmed for AF-ON meaning thumb focus fans can easily have perfect functionality. The shutter release can be accessed at the same time, offering extremely quick focus-to-shoot finger action. Like many Nauticam housings, the play button is brought up to the left thumb, and the three command dials (think shutter speed, aperture and exposure compensation) can be adjusted quickly with minimal reach. The ISO button is within short reach of the right thumb, important for video shooters. Speaking of video, the record button is on the top right, thus eliminating camera shake during video start/stop.

The Function Menu button opens up common camera settings to a quick menu, and this button is a short reach with the right thumb. The programmable C3 button is a very easy reach and can be programmed for any of several functions. The housing features a switch to change between the EVF and the LCD providing rapid and secure transition between viewing modes, and supports Nauticam's well renowned viewfinders.

Installing a lens with a gear attached is made easy by the new pull-out zoom/focus dial.

A Nauticam Mini Flash Trigger made specifically for Sony is an available option, allowing the camera to shoot rapid fire with flood free optical cables. The housing includes an M16 bulkhead port for optional HDMI out, Nikonos style sync cable or other external accessory.

The NA-A7II accommodates for the larger than expected grip of the camera. Rather than compromise on image quality, the Nauticam designers chose to create ports than take into account this difference, hence a separate entry in the port chart for this housing.

Lens Matters
The original A7 and A7R cameras from Sony sparked a huge interest in going full frame for mirrorless. For the underwater photographer, this enthusiasm was quickly diminished by the fairly limited lens selection. Underwater image makers rely on very wide angle lenses and macro lenses, and they were nowhere to be found.

However, the recently released 16-35mm is a game changer. This is a lens from the Sony Zeiss partnership, quaintly dubbed the Sony Vario-Tessar T* FE 16-35mm F4 ZA OSS. It's a terrific rectilinear wide angle zoom that focuses close and demonstrates very good sharpness all around with medium to large sized dome ports. The Nauticam 180mm dome is an ideal choice for this lens.

For macro lovers, Sony two days ago announced a 90mm macro beauty (Sony FE 90mm f/2.8 Macro G OSS), and this lens will be supported as soon as possible after it is shipped (slated for July). Also just announced is a new 28mm f/2 lens with a fisheye adapter, similar to what Sony did with the fisheye and wide angle adapter on the 16mm lens for the NEX series. This is an appealing way to get fisheye, as it allows multiple configurations with a single lens. Look for more info about Nauticam support for this lens when it ships (slated for May).

Owners of Canon full frame lenses like the EF 8-15mm f/4L Fisheye USM, EF 100mm f/2.8L Macro IS USM, or the EF 16-35mm f/2.8L II USM lenses will apreciate the ability to use these fine optics with the A7 series. This is made possible with a Metabones adapter (Canon EF Lens to Sony NEX Smart Adapter (Mark III or Mark IV)). These lenses work well on the A7 series, providing both aperture and autofocus control from the camera.

Speaking of Lenses
Nikonos "water contact" lenses are the stuff of legend, but too many of them are sitting in a box in a closet. Time to dust them off! The full frame A7II is a great way to bring those lenses back to action. With the full frame sensor, this Sea&Sea 12mm or the famous Nikonos 15mm behave like they were intended to.

Viewfinder Options
The NA-A7II ships with a standard 0.66x viewfinder. This standard optical glass viewfinder is travel friendly and suitable for image makers that care to use the LCD for most framing. Many photographers prefer the ease of a magnified viewfinder with adjustable diopter to take advantage of the excellent EVF in this camera.

Nauticam produces a straight 180_ enlarging viewfinder and a 45_ angled enlarging viewfinder to enhance the ease of close quarters work often associated with macro shooting. Both viewfinders have high quality optics, and allow bright viewing of the entire image. A patented external dioptric adjustment allows personal adjustment to a sharp-as-a-tack standard underwater and viewfinder changes can be executed in less than 30 seconds without using tools. Exceptional composition and focus accuracy have never been more accessible.

NA-A7II Feature Checklist
Integrated Vacuum Check and Leak Detection System
The Nauticam vacuum check and leak detection system is available with NA-A7II as standard equipment. Combined with an optional vacuum valve, this monitoring system provides constant updates on the water tight and safe to dive status of the housing. A simple coded LED lighting system lets the user know that the vacuum is solid, or that the housing is losing vacuum. Leak detection is built into the same circuit, so if there is water intrusion, an audible and visual indication will occur. The housing ships with a rear bulkhead port specifically for installing optional vacuum valves, leaving the other bulkhead port available for HDMI, sync cables and other accessories. 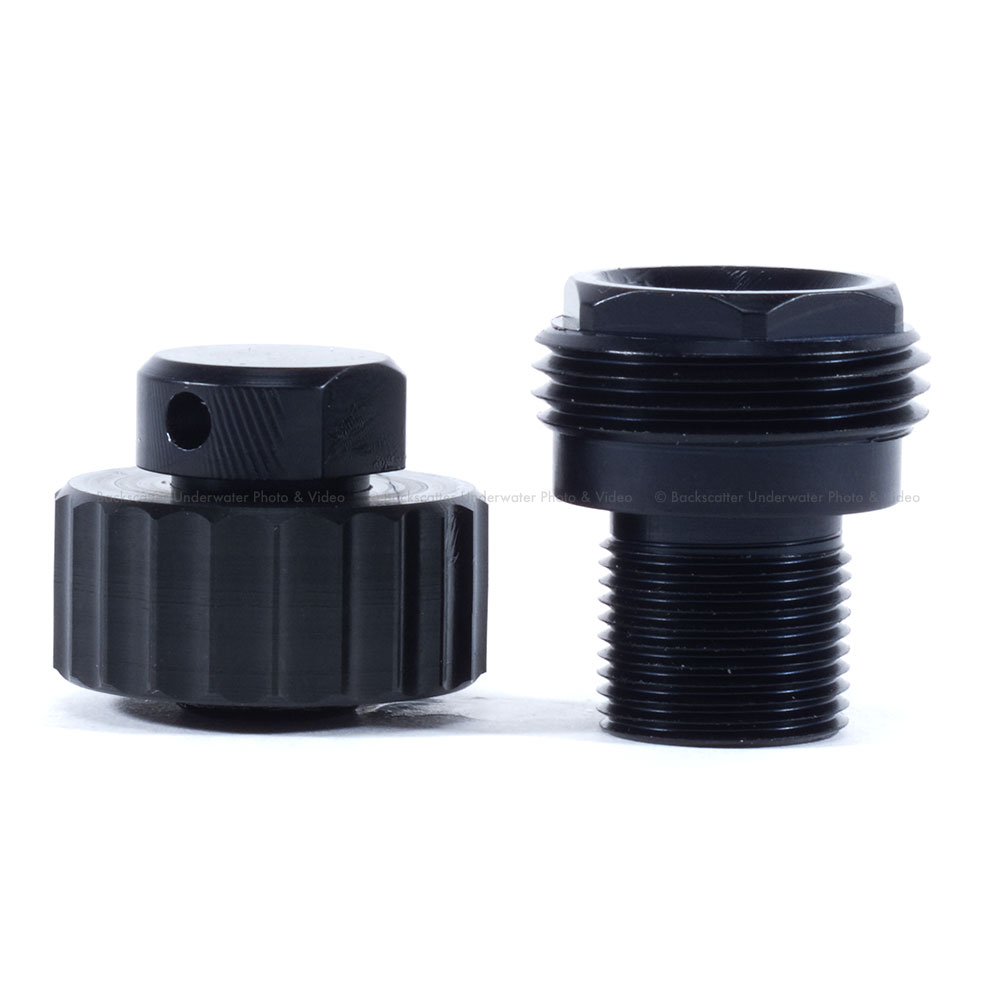